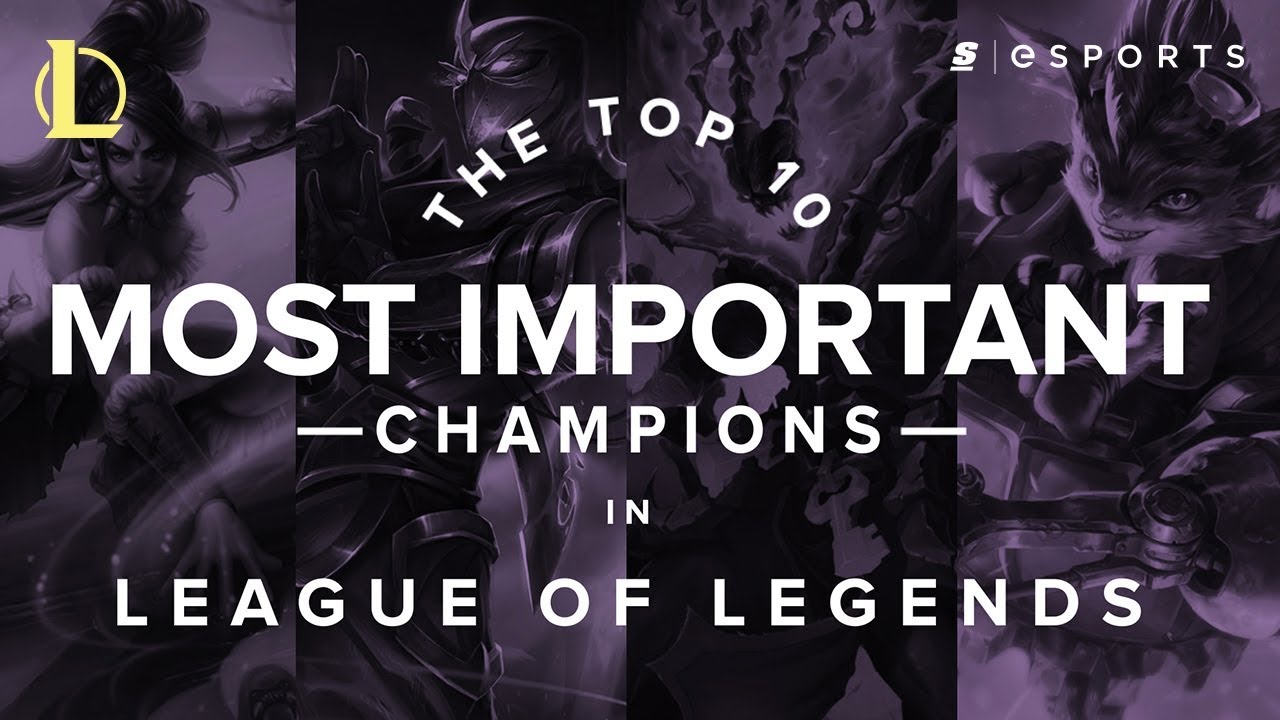 The Top 10 most important champions in competitive League of Legends

Some champions in League of Legends have been mainstays for years, influencing the competitive scene across multiple splits. Others' time in the sun was shorter, but their impact cannot be understated.

Before we jump into the list, here's a brief breakdown of the criteria we used to create it:

With a fast and furious playstyle, Lucian has become the most important AD carry in the game. His high mechanical ceiling separates good players from great ones, rewarding proper execution with ridiculous DPS and mobility. Much like Vayne before him, Lucian pushed the boundaries of AD carry play into a new realm with the complexities of his kit.

While he was first relevant as a lane-dominant pick, Lucian has found a home in the mid lane and even occasionally the top lane. A strong pick across multiple splits and one of the flashiest champs in the game, Lucian’s influence and flexibility cannot be understated.

Gragas has been a highly influential pick since the first year of competitive play, remaining relevant in multiple roles across countless metas. He started his life as a premiere burst mage, dominating the mid lane during Season 1 and Season 2. Later, the utility of his ultimate and his arsenal of disables helped him transition smoothly to the top lane and jungle, where he’s been a stable pick for many years.

Few champions in the game have had this type of longevity, and while others have come and gone, Gragas has always found a way into the competitive meta. Sure, his playstyle has changed a lot over the years, but Gragas is about as reliable as they come.

Few champions have had as immediate and dramatic an impact on the meta and professional scene as Rumble. His unique play patterns changed the balance of the top lane and his mid-game power spike shifted the dynamic of objective fights, giving him a profound impact upon just about any game in which he’s picked.

Since his early prominence, Rumble has stuck around as a pocket pick in the top lane and even the jungle, and the threat of a skilled player can cause teams to approach pick-bans in a totally different way. Rumble emphasizes proper mid-game play, rewards aggressive laning and can turn the tides of a game with a well-placed ult.

Nidalee has been played across multiple roles, including top, mid and jungle since season one and is a highly sought-after pick in most metas. She helped launch the careers of some of League’s first stars, like HotShotGG, Stanley and, later on, Faker.

But what makes her so important is the variety of styles which have worked for her, allowing Nidalee to remain relevant in several roles across the years. Whether it was her days as a damage top laner, her bruiser style play, her emphasis on poke in the mid lane or the more well-rounded pseudo-assassin of the jungle, it is Nidalee’s flexibility that has shone through.

While Shen has had lengthy periods of time where he wasn’t in meta, his importance to the game comes from far more than his popularity. In fact, while he’s far from the most dynamic or exciting pick on this list, Shen pushed the macro game of League of Legends forward and developed team-play and coordination in ways no other champion has.

As League developed into a game with a heavier emphasis on proper map play and team coordination rather than individual skill, Shen was the spearhead leading that change. His global ultimate, solid laning and fight-defining taunt pushed him into the upper-echelon of influential champions. He’s even found a home pre-and-post rework in the support role, thanks to his flexibility and ability to enable his teammates. There’s no doubt Shen was instrumental in bringing the competitive scene to where it is today.

Contrary to her whimsical nature, Lulu has been one of the most reliable picks across multiple roles and metas for years. She’s jumped from support, to mid, to top and more recently back to support, but always offers the same things: great utility, shields, peel and a good amount of damage. Much like Nidalee and Gragas, it’s Lulu’s flexibility and the inherent strength of her kit that has helped her remain relevant even through meta shifts and nerfs.

Historically, her popularity has gone through peaks and valleys, but when she’s strong , Lulu is first-pick/first-ban material. She proved that support utility picks could find a home in the mid lane, leading to a more open pool of picks in the role for years even after she left, such as Karma. Unparalleled utility, flexibility and trailblazing a new style of mid lane picks: Lulu brings just about everything to the table.

From his release in 2012 through until the end of 2014, Zed was the defining champion of the mid lane. His damage and outplay potential made him shine in the hands of some of the brightest stars of the era, including Bjergsen, Ryu and Faker. Few assassins have single-handedly shaped a meta, but Zed did just that, standing as a must pick or ban for the better part of two years.

While he has since fallen off significantly and become a rarely-played pocket pick, that doesn’t really affect Zed’s standing considering his historic dominance. There’s also an intangible significance to Zed: as League was exploding in popularity in 2013, Zed was the face of the game, and in the hands of its most skilled players he cultivated an image of League as a dynamic and exciting spectator experience.

Orianna is a champion that has been wildly important even when she is not a popular pick. Why? Because for years, every other mid lane champion has been judged against her. She is the gold standard for any mid lane pick, the baseline for measuring the effectiveness of other champions, offering utility, safe laning, a devastating teamfight ultimate and more. She almost never falls fully out of the meta, as she offers so much stability to every composition, making her relevant from Season 2 all the way until today.

But what makes Orianna so special is her impact on so many careers. Any professional mid laner must have an Orianna. Essentially, she is the champion by which their ability is judged. No other champion fills this same niche quite as well, or as importantly, as Orianna.

Unlike many of the other picks on this list, Thresh has reached competitive success in only one role. However, his influence on the growth of the support position catapults him into rare company among the most important champions of all time.

Thresh empowered support players to a level of playmaking they had never seen before, offering initiation, peel, disengage, utility and the ability to save priority carries. His dynamic, impactful playstyle was a step above the traditional support picks of Sona, Janna and Alistar, and since his release he has been a consistent, if not outright dominant, champion. He has rarely, if ever, fallen out of the meta, withstanding the test of time in ways few others have. It doesn’t hurt that some of the flashiest support highlights come from sick Thresh hooks or Flays, bringing a whole new meaning to the term “playmaking support.”

Lee Sin is, simply put, the most important League of Legends champion — period. While it took a little while for pro players to figure him out, high-level Lee Sin play pushed the boundaries of what was possible on a mechanical level. He’s been played top, jungle, and occasionally even mid, becoming a highly sought after pick from Season 3 to Season 6. His kit offers nearly unparalleled mobility, a tremendous early and mid game presence, initiation and utility.

His dominance at his peak rivaled Zed, his utility put him in the same tier as Thresh and his consistency makes him a peer of Orianna. Much like Orianna for mid laners, he set a new bar for what was expected of a jungler, and it bears repeating that Lee Sin changed the way we think about mechanics at the pro level. It would be a disservice to name Lee Sin anything other than number one on this list.

7d ago
LoL
Tyler1 is Saving the Rookies Riot Left Behind

2 months ago
LoL
There's Another Huge League of Legends Scandal

2 months ago
LoL
How Do You Fix the Dumpster Fire that is NA Lea...

Award-winning video features on the games, teams, and personalities you love.